It was almost a year ago that we were on a glorious European vacation. One of the most affecting things for me on that trip was the thundering of church bells in every town. In Croatia especially, we heard them every day. There are a few things about them that I like. They remind me of times past, the sound is up-lifting, and they represent stability and community. Living in Bangkok I had much the same feeling when I’d hear the muslims’ melodious prayers at the mosque down the street. Similarly in Southern Thailand’s temples, it was the chanting of monks, with the worshippers’ echo. But my favourite sound is the church bells.

One particularly remarkable place for hearing church bells was old town Trogir, in Dalmatia. It is a tiny islet 250m x 500m in size with about 13 old churches, at least 7 of those have real bells which ring out emphatically each day. I was moved, hearing them all ring out altogether, unsynchronized yet timely.

The most unforgettable bells are at The Church of St. Jurja. Built in the 1500’s on Vis Island, it has three bells at the top of its tower which start in unison. Each bell gains its’  own momentum, no longer moving in time with the others. They slow and stop on their own. Three bells, then two, until the final bell continues to sound alone. It is a beautiful bell-song, unique each time.

I like to go into churches when service is not session. It’s still, powerful, and exudes a sense of peaceful connection. Hearing those bells, though, that sound fills my ears, bones, and heart. In Croatia, I swore that I would do whatever I could to eventually live in a place where I could hear real church bells every day.

Since coming home I have been missing this. Then recently, on a walk in my Calgary neighbourhood, I heard church bells! It was St. Andrews church, only 700m from our house. How did I not notice this before?

St. Andrews doesn’t have real bells, rather, they are recorded, played in the morning and early evening. It has a similar effect and reminds me of my dream to be in Europe. 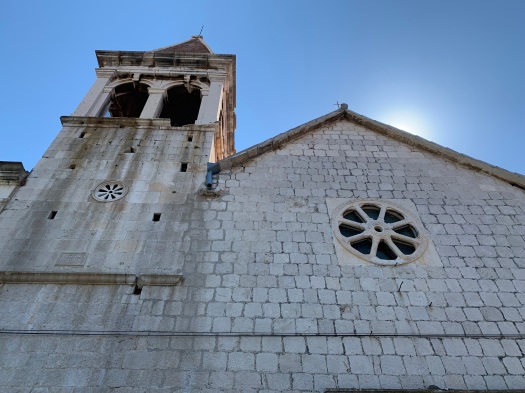 I want to keep my dream of moving to Croatia alive but at the same time, I don’t want to miss what is right in front of me now. I am very fortunate to have church bells in my neighbourhood, reminding me of what it felt like in Europe. I am also lucky to be home to be able to hear them. Let’s dream it up, but while we do keep our eyes open to what is all around us so we don’t miss the joys and gifts of every day!

Here are two videos. The first lets you hear the three bells in Vis, Croatia and the second is the recorded bells near my house in Calgary. Which do you like better?

Fantastic street art found in a little secret corner of Alghero on the island of Sardegna.
#sardegnakite #beachday #💙 #justneedthis
Yesterday we visited some spots we think @harrystyles filmed the Golden video and made our own inspired version.
After a second drawing session. Requires one more short session and done!
Finished with this one. I’m keeping the black paper instead of colouring it. I can’t really explain why, it just feels right.
#artfromclothes #artyyc #chalkdrawings #practicing